Patterns of alpha oscillations are weaker in people who succumb easily to the drug propofol, study shows. 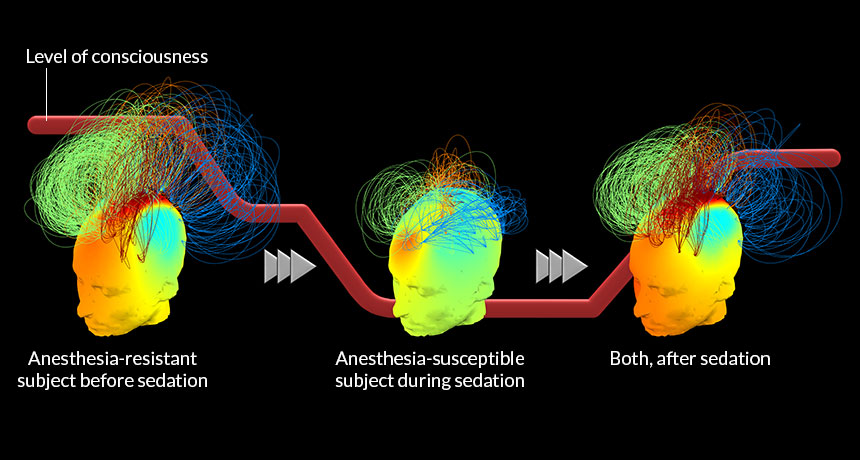 Signals in the brain can hint at whether a person undergoing anesthesia will slip under easily or fight the drug, a new study suggests. The results, published January 14 in PLOS Computational Biology, bring scientists closer to being able to tailor doses of the powerful drugs for specific patients.

Drug doses are often given with a one-size-fits-all attitude, says bioengineer and neuroscientist Patrick Purdon of Massachusetts General Hospital and Harvard Medical School. But the new study finds clear differences in people’s brain responses to similar doses of an anesthetic drug, Purdon says. “To me, that’s the key and interesting point.”

Cognitive neuroscientist Tristan Bekinschtein of the University of Cambridge and colleagues recruited 20 people to receive low doses of the general anesthetic propofol. The low dose wasn’t designed to knock people out, but to instead dial down their consciousness until they teetered on the edge of awareness — a point between being awake and alert and being drowsy and nonresponsive.

While the drug was being delivered, participants repeatedly heard either a buzzing sound or a noise and were asked each time which they heard, an annoying question designed to gauge awareness. Of the 20 people, seven were sidelined by the propofol and they began to respond less. Thirteen other participants, however, kept right on responding, “fighting the drug,” Bekinschtein says.

EEG measurements that tracked electrical activity in the brain revealed a brain signature that differed between these two groups. In people who resisted the propofol, a particular type of brain wave called an alpha oscillation appeared to be strong and efficient, with lots of connections between near and far brain areas, the team found. In contrast, people who succumbed easily to the drug had weaker, less efficient alpha wave behavior.

This difference was present even before the drug was delivered, Bekinschtein says. At the beginning of the experiment, people already showed predictive alpha wave signatures. The results raise the prospect that a presurgical EEG measurement could pinpoint the lowest dose of drug that would still put a person under while reducing potential side effects.

EEG machines are widely available in clinical settings, and Bekinschtein and colleagues are trying to adapt their results to be useful to anesthesiologists. “It’s a very simple analysis to do” once the mathematical framework is in place, Bekinschtein says. He and others hope to design a way for physicians to enter a person’s raw EEG data and get an estimate of anesthesia susceptibility.

Purdon cautions that the results are based on a limited number of people. “It’s a preliminary finding in that regard,” he says. And more work is needed to translate the results so that they can be applied to individual patients. Nonetheless, he says, the results “all really make sense.”